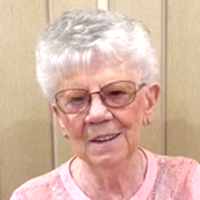 Geneva E. Eckhardt, 91, of McCook passed away at the Hillcrest Nursing Home in McCook on Monday, March 22, 2021.

She was born in Sioux Center, Iowa on Nov. 21, 1929 to Peter Roy and Gertrude (Horstman) Bartels. At a young age Geneva relocated several times with her family and attended school in Iowa and Washington State before moving to Nebraska.

On Nov. 26, 1946 she was united in marriage to John Eckhardt in Culbertson. The couple moved to Denver, Colo. for eight years before returning to Nebraska in 1953 to operate the family farm northwest of Culbertson.

Geneva worked at several jobs, with the most prominent being the department manager of Health and Beauty at Hinky-Dinky Grocery in McCook. Geneva was regarded by many as GRANDMA.

Geneva was an excellent seamstress designing and constructing much of her daughter Debra’s wardrobe as well as husband, John’s tailored suit jackets. She was a 4-H leader instructing young 4-H-er’s in the art of sewing, knitting and crocheting afghans, sweaters, baby blankets, and making a lifetime supply of “scrubby” dish scratchers and dish clothes for her family and friends.

She and husband John loved square dancing, as well as the waltz and other styles of dancing. The couple could tear up any dance floor.

They enjoyed travel to John’s many United States Navy Reunions and ceremonies. Geneva was a regular at the McCook Eagles Club and TJ’s Family Fun Center playing pitch with her friends on card nights.

Geneva loved the independence of driving and until recently, drove herself and friends regularly.

It was Geneva’s deep and sustaining love of family that was the driving force of her life. She loved and cherished her family and treated them all equally. Geneva was a Christian woman and a member of the Peace Lutheran Church of McCook.

She is preceded in death by her husband John in 2005; parents, Peter and Gertrude; brothers, Gerald (Mary) Bartels, Howard (Betty) Bartels, and Robert “Bob” Jensen.

Visitation will be held on Sunday, March 28 at the Herrmann Jones Funeral Chapel in McCook from 2-5 p.m. Funeral Services will be held at the Peace Lutheran Church on Monday, March 29 at 10 a.m. with Pastor Lonnie Felcher officiating. The family has requested masks to be worn.

Memorials may be left in Geneva’s name to the Community Hospital Hospice. Friends may leave on-line condolences at herrmannfh.com.