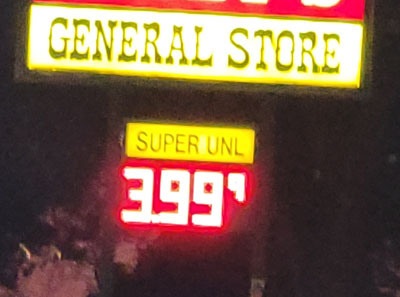 Gas prices fell below $4 per gallon in North Platte this week, and at some stations, the price has fallen well below $4, after reaching an average around $4 70 a month or so.

Most of the price decline has come in recent days. Prices are dropping all around the country, the AAA Motor Club reports.

In North Platte, prices for regular sank to as low as $3.79 a gallon at some stations along I-80 Friday. The price of $3.99 is frequently seen on gas station signs in the middle of town.

A price of $3.74 a gallon was reported Thursday in the Omaha area by the same reader who took the photo below.

As of Friday, Triple A put the average Nebraska price at just over $4.09, a drop of 62 cents from one month earlier, but still much higher than a year ago, when gas cost about $3 per gallon.

As of Thursday, nine states had average prices under $4 per gallon, with over 40,000 stations under that price, “keeping $266 million per day in motorists’ wallets versus mid-June,” said Patrick De Haan of the Gas Buddy website.

Recession fears and headwinds from rising interest rates continue to weigh on the outlook for gasoline demand, but whether these factors will influence structural changes that will affect the long-term price of the commodity remains to be seen, according to Capital.com.

Gas prices have increased since February 2021, and shot skyward this year in March, when they jumped about 80 cents a gallon in three weeks, according to Gas Buddy.