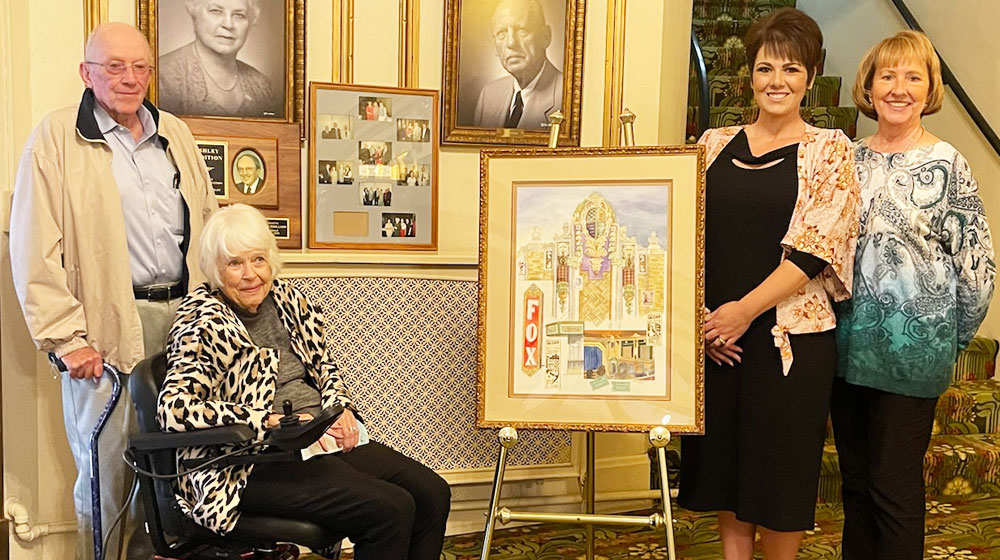 A unique watercolor collage painted in 1984 by Mary Beth Dodson was presented to the Fox Theater Wednesday afternoon in a donation from former board members, Dr. John (Jack) Ashley and Dorris Ashley.

The piece depicts some of the signature architectural elements at North Platte’s Fox Theatre, including the iconic neon sign, detailed exterior ornamentation on the building and the exit stage left.

Pieced together with the watercolor are postage stamps with images of Grace Kelly and Charlie Chaplin, plus movie posters featuring Elizabeth Taylor and Charlton Heston.

The Ashleys bought the painting at the Nebraskaland Days amateur art show. Dodson told the Bulletin that the price was probably around $400.

“I was kind of hoping that the Fox itself would buy it,” she said, “and when the Ashleys did, they said they would donate it to the theatre someday, which I was happy to know.”

“I parked my car across the street by what was then the Sears building on a Sunday afternoon so I could paint the sign,” she said. “I took my paints to the back seat of my car and looked out the back window and painted it on the shelf behind the seat. It was a Sunday afternoon, so I had a good view. There were no other cars on street.”

Later, she added a balcony scene.

“One night I took a picture of people in the theater balcony in the dark and painted that part at home. I loved to do that painting, partly because both the Fox and Paramount theaters were such a part of my growing up years.”

Dodson also painted the Paramount. That work too is privately owned.

“We are so grateful to Jack and Dorris for their contributions and incredible years of service to the playhouse,” Rajean said.

Jack and Dorris Ashley currently live in Cheyenne, Wyo.  Due to a recent move to a retirement village, they are downsizing their belongings and Jack thought it would be a good time to see if the playhouse would like the artwork. Dorris quickly added, “Plus, we like to donate things.”

Aloi said the playhouse will find a special place to showcase the piece so it can be seen and enjoyed by the public.

Dr. John Ashley is a former Playhouse board member and volunteered for two decades with varying construction projects. He also helped with fundraising and the renovation of the exterior Fox sign.

Dorris established and led the Town Hall Lecture Series at the theater for the first five years of its now 40-years of operation.

Dodson lives and paints in Coronado, Calif,, a resort community in the San Diego Bay.