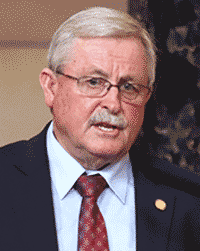 Erdman at the Legislature: How rules are changed

This year I was elected chair of the Rules Committee.

At the beginning of each biennial session of the Nebraska Legislature new rule changes get proposed by senators, and so it becomes the job of the Rules Committee to sift through their proposed changes and decide which ones to advance to the floor of Legislature for a full debate.

The public gets the opportunity to weigh in on each of these proposed rule changes.  So, last Thursday the Rules Committee held a public hearing at the Capitol that began at 1:30 p.m. and finally ended at 10:30 p.m.

That’s a total of nine hours of testimony on the proposed rule changes.

Normally, a public hearing of this kind would have extended beyond midnight. So, in order to expedite the public hearing in a timely manner, I had to make a couple of important executive decisions as chair of the Rules Committee.

First, I had the Clerk of the Legislature group all of the proposed rules changes according to topic.  This way we were able to hear all of the opening remarks by the introducing senators on that topic before we opened it up for public comment.

Then, I limited public testimonies to two minutes. This way we were able to get through all 58 rule proposals and finish before midnight.

I proposed six rule changes of my own. Three of those are particularly noteworthy to the general public.  They are noteworthy for their efficiency, transparency, and controversial nature.

So, I would like to take some time to tell you about these three proposed changes.

The first one relates to the matter of efficiency.

Therefore, I prepared a graph for the Rules Committee showing how each committee could have an odd number of committee members so that a vote on a bill should never end in a tie.

Because the standing committees meet on different days of the week, the challenge for me was to prepare a graph showing how every senator could have a committee meeting on each day of the week.  My graph accomplished that goal.

My next proposed rule change relates to transparency.

Unfortunately, this rule change would not be able to apply this year for the simple reason that the Clerk of the Legislature would need some time to set it up.

My last proposed rule change was the most controversial.

I proposed that the executive sessions of the legislative committees be closed to the media. It is odd that the press is allowed to sit in on closed meetings of the Legislature, but the general public is not.  Closed sessions for all other kinds of committees always implies that the media are not allowed to sit in on the meetings. The primary reason for this rule change is because committee members cannot have a free exchange of ideas about a bill when members of the media are present.

For obvious reasons, members of the media showed up to testify against this proposed rule change.  According to them, without the presence of the media in the room during an executive session, there would be no transparency and the public would be left out in the dark.

However, this problem is rectified by recording each committee members vote on the bill and posting it on the Legislature’s website. Moreover, if those testifying from the press were truly concerned about transparency in the Legislature, then they never would have taken a public stance against the proposed rule change to eliminate secret ballots when voting for committee chairs.