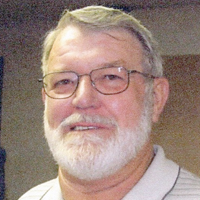 Eldon was born May 9, 1943, the son of Martin and Myrtle Ford in Sabetha, Kan. Eldon attended Sabetha schools and became a well-respected athlete early on as an underclassman.

As promising as his sports opportunity might have been, school gave way to his love for the open road as he became an over-the-road operator. Eldon’s safe driving record and total miles driven measured into the millions and he was awarded a safety supervisor position with Consolidated Freightways for a period of time.

Eldon was married to Sharon Wetzel and had three children, Traci, Kimberly and Rodney.

He was a gifted “tinkerer” whose workshop was always full of equipment under repair for friends and family. Camping and deer hunting with his son and friends became a passion later in life. He also liked gardening, canning and raising black labs

Eldon was a member of Platte Valley Lodge #32 AF&AM and the North Platte Shrine Club. He was a well-respected, hard-working, long-term North Platte resident who appreciated what he had, loved his family and friends, and would do anything to help others, expecting nothing in return. He will be missed greatly by all.

He is survived by his children, Traci (Curt) Robertson of Peru, Kimberly (Doyle) Duggan of Dickens, and Rodney Ford of Auburn; and brother, Warren (Debra) Ford of Broomfield, Colo. He was also blessed with seven grandchildren and seven great-grandchildren.

Eldon was preceded in death by his parents, Martin and Myrtle Ford; and granddaughter, Cortney.

A Celebration of Life with Masonic Rites is 1 p.m. on Thursday, April 1 at Odean Colonial Chapel, which is in charge of arrangements. Pastor Mark Baldwin will officiate.

For those unable to attend, services will be recorded and posted to odeanchapel.com, where also any special message or remembrance may be shared with the family.