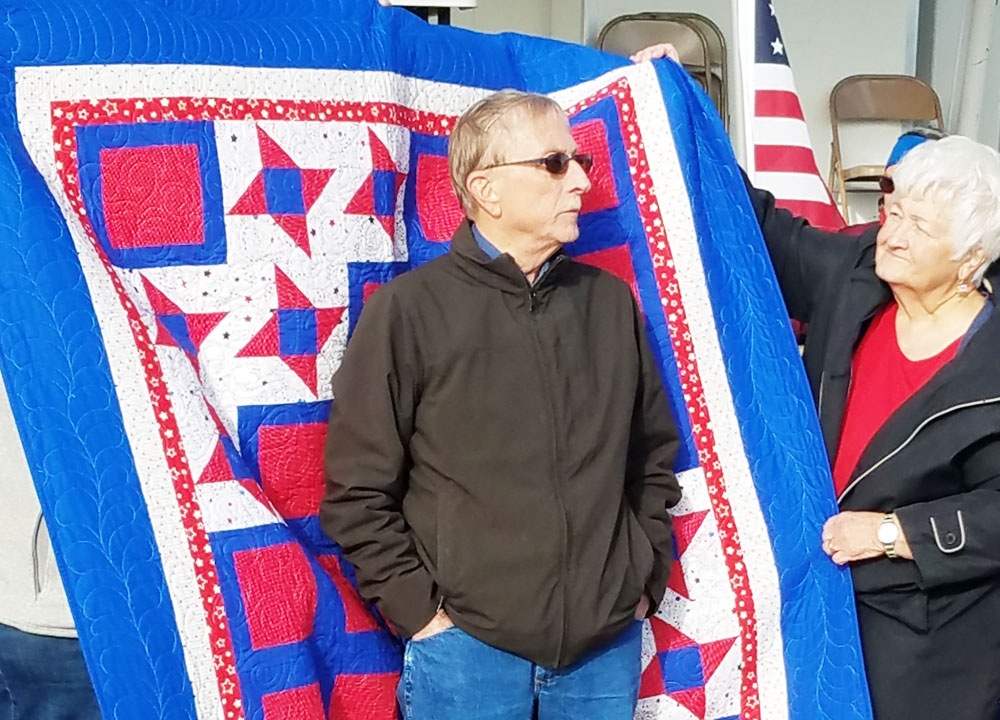 Eight veterans received warm, heavy, handmade quilts on Veterans Day from the Heartland Nebraska chapter of the Quilts of Valor.

The quilts were presented at the 20th Century Veterans Memorial in North Platte, with U.S. flags snapping briskly in the cold northwest wind.

The quilts are made in three layers to provide comfort and show gratitude for the veterans’ service, sacrifice and valor.

The Lincoln County quilters presented their first quilts on Veterans Day 2019. The chapter has presented 74 quilts since then. The group was recently recognized by Lincoln, Neb. chapter as the most active in Nebraska.

The recipients: (tap on images to enlarge)

Gene served in the US Army from May, 1975 until December, 1979. His basic training was done at Fort Leonardwood, MO. From there he was sent to Fort Polk, LA, where he trained with special forces, and the 181st Airborne in jungle warfare and then served in Vietnam. Gene said he did what he was trained for and spent 180 extra days just so he didn’t have to have guard duty when he got home.

A special thing to mention is that the person who nominated Gene to receive a QOV is now deceased. Terry Harlin nominated Gene to thank him for all the jobs and things he did for him. Quilt pieced by Sandy Wyngaard, quilting by Chris Reinert and binding by Mitzi Mueller.

Mark served in the US Army from November 1967 – November 1969. He joined the National Guards while in high school and took basic training in Fort Leonard Wood, Mo. and was discharged from guards after four years.

In May of 1968 he went to Vietnam where he was stationed at Camp Enari at Pleiku with the 4th infinity division in a supply and transportation unit. Drove a five-ton semi-truck to deliver supplies to the forward fire bases. Mark received an award for driving 25,000 miles accident free.

Mark qualified for sharpshooter with the M-1 and M-14 and expert with the M-16. He received the National Defense Service Medal, Veteran Service Medal with two stars and the Republic of Vietnam Champion Medal.

The quilt pieced by members of Heartland Quilt Guild; quilting by Chris Reinert and binding by Mitzi Mueller.

Mike was in the United States Marines from December 1965 through November 1967. He went to the Marine Corps Recruiting Depot in San Diego for his basic training.

He served his country in Vietnam with the 4th Logistics Command and took part in G-2 Intelligence.

Mike was a liaison at NAMO, a combined action company. He took orders, instructions, and memos to soldiers.

Quilt made by Maureen Childears and quilted by Susie Walker.

Doug served in the US Army from May 1964 to May 10, 1966. His basic training was at Fort Leonardwood, MO. His assignments took him to Fort Benjamin Harrison, IN and Fort Bliss, TX where he served with the STRAC unit with a mission of high readiness. He

His quilt pieced by Julia Albrecht; quilting and binding by Sara Kenny

Russell served as an Army National Guard Reservist from August 1957 to February 1958. Russell then went into the Air Force National Guard Reservists from February 1, 1958 to October 27, 1961. The Air Force called Russell to active duty for the Berlin Crisis and he served as Airman 1st Class Medic- Practical nurse from October 27, 1962 to August 31, 1963.

That October both Russell and his twin brother were called up to serve. They were the only two out of their unit to be called up. Russell was honorably discharged as E1 Airman First Class. Russell is a true patriot; he LOVES his GOD and COUNTRY.

His quilt was pieced by Sandy Wyngaard; quilting and binding by Chris Reinert

Roland enlisted in active duty with the Army in 1954. His basic training was in Fort Riley Kansas. He then went on to specialized training at Ft. Gordon for teletype repair.

In 1954 he went to Ft. Devon’s, in Massachusetts for cryptography training.

He was then stationed in France and served four years, then continued to serve as a National Guard Reservist.

Duty stations included Germany, Vietnam, France, U.S. and the Secret Service. During his duty in Vietnam from 1970-1972, was with the 556th Mountain Men, he was injured during this time.

Roland was a sharpshooter for the Army and retired with the rank of Master Sergeant.

Roland was awarded the meritorious service medal three times; the bronze star; his service with the secret service; and a purple heart.

His quilt was made by Vicki S.

Joe Grachek Jr. enlisted in the Air Force Aviation Cadet training program in April 1955 and received his navigator wings and commission in July 1956.

His first assignment was to SAC in the 310th BW as a KC-97 tanker navigator. He was next assigned to the 22nd BW as a KC-135 navigator.

While a crew member, he flew numerous TDY refueling missions in Europe and later in the Southeast Asia war. He was next assigned to Hastings RBS and deployed from there first to Korea as commander of a bombing site and then as commander of a bombing site in Thailand. His final assignment was to Rapid City as chief of the Intelligence branch of the SAC alternate Looking Glass. He retired in 1975 with the rank of Major.

He received numerous medals the Air Medal with OLC and the Meritorious service.

The quilt was made by Chris Reinert.

Bernard volunteered for the draft at age 18 on Jan. 30, 1943 and enlisted in the U.S. Navy at Camp Farragut, Idaho in April 1943, where he completed basic training. He was then assigned to the Armed guard unit, which consisted of handling large guns on merchant ships. His base was at Treasure Island in San Francisco.

After 3 months training in San Diego, Bernard was assigned to a Merchant Marine Ship and later to a troop Transport Ship. He served in the Pacific and worked many invasions in the islands of New Guinea, Guam, Saipan, and the Philippines. They usually traveled in convoys of 30-50 U.S. Navy Ships in invasions. He was discharged in March 1946.

The quilt was made by Marilyn McGahan.

Anyone interested in nominating a veteran for a quilt can do so at www.qovf.org/nominations-awards

If you would like to play a part in North Platte’s branch of the Quilts of Valor Foundation, contact Chris Reinert at creinert1@charter.net for volunteer opportunities.

Photos by George Lauby. Tap on images to enlarge.