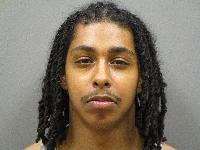 Kevin A. McGinley, 24, of Pueblo, Colo. is charged with possession more than three pounds of marijuana, 225 packages of THC shatter and 112 xanax pills with intent to deliver, Wood said.

McGinley was headed toward Red Wing, Minn. He was also cited for not having a drug tax stamp, Wood said.

He paid the required 10% of a $50,000 bond Tuesday and was released from the Lincoln County jail.

Wood said McGinley was going 81 mph in a 65-mph zone when he pulled him over on NE Highway 92, near the Logan-Custer county line.

The marijuana – 3.25 pounds in all – was contained in vacuum sealed packages. The THC was in dispensary packages and the pills were in a mailing box, Wood said. Wood said he smelled marijuana coming from the vehicle when he stepped up to it, leading to the search.

The day before, Wood stopped Anthony J. Schnabel for speeding near the junction of U.S Highway 83 and NE 92. He said Schnabel was traveling 76 mph in a 65 mph zone.

Wood found 12 THC vape pens and two grams of THC concentrate in the vehicle. He said Schnabel was headed to North Dakota.

Schnabel was charged with possession of THC and not having a drug tax stamp. He was held on $25,000 bond and paid the required 10% on Sunday.

Both men are due back in Logan County on May 11 for court appearances.

Wood said there has been a considerable amount of drug traffic through Logan County in recent months, with drivers coming out of Colorado and heading north and east to the Dakotas, Wisconsin, Minnesota and northern Iowa.

He said the drug traffic has seemed to increase with the issuance of COVID-19 stimulus checks.