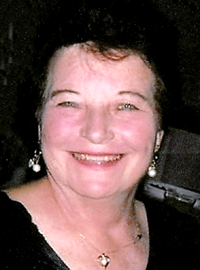 Dorothy Fugate, 83, of North Platte peacefully passed away at home with her family by her side on April 28, 2021. She fought a long, hard battle with cancer with courage, dignity and grace, never complaining and always had a smile on her face.

Dorothy was born Aug. 16, 1937, one of six children born to Emily and William Doyle, an Irish Catholic family in North Platte. She graduated from St. Patrick’s High School then married Buster Lee ‘Bud’ Fugate on June 12, 1956 in Julesburg, Colo., and became a mother to five children.

Dorothy was a strong woman who accomplished so much during her lifetime. At a young age she became an entrepreneur, delivering the Omaha World Herald and collecting pop bottles then used her money to buy all the candy she could eat for a dime. Years later she was the licensed director and owner of Winnie the Pooh Preschool where, for 34 years, she prepared young children for kindergarten, and was the first female U.S. Postal Service mail carrier in North Platte.

Dorothy’s love for cooking began when she was young, making old-fashioned fudge, then evolved into cooking from scratch and creating new dishes including Chimichangas and Irish cream chocolate cake. One recipe, Japanese Oyster Peanut Chicken, earned the Grand Prize in the North Platte Telegraph cooking contest. Dorothy always made delicious meals for her family and enjoyed having tea parties with her grandchildren.

Along with cooking, Dorothy was an avid gardener who enjoyed preserving her harvest.

Dorothy was not one to sit home. She enjoyed the camaraderie of her early morning Cardiac Rehab coffee club, competed in over 200 5K races and triathlons, with the Jingle Bell 5K being her favorite, and twice carried the torch for the Cornhusker State Games through North Platte.

When she was in her 60’s Dorothy was active in kick boxing and roller blading then earned her Second Degree Black Belt in To-Shin-Do after the age of 70. But more than anything Dorothy loved to dance, especially square dancing and would drive anywhere just to dance.

She loved her family and was a fan of Daniel O’Donnell (internationally known Irish country singer) who after seeing him in multiple concerts, became her friend. Daniel personally serenaded Dorothy with “When Irish Eyes Are Smiling” after she finished 30 rounds of radiation and just before she passed away, he sang to her “Far Banks Side of Jordan”, her favorite song.

Along with her family and friends, Dorothy dearly loved her handsome Golden Retriever, Rolly, who was her faithful, loyal companion. He went everywhere with her, waited patiently for her to finish her 5 a.m. workouts and comforted her after every cancer treatment.

Dorothy will be greatly missed, forever loved and remembered for her always being quick with a smile and a joke. Her doctors described her as a ray of sunshine with a bright, luminous presence and as a woman with a radiant smile that lit up the room and despite being deprived of her speech, she said so much with her smile.

She was preceded in death by her husband, Bud; parents, William and Emily Doyle; and all her siblings, Trish, Mary, Dr. Bernard, Robert and Joseph Doyle.

Services will be held at St. Patrick’s Catholic Church. Rosary will be at 7 p.m. on Tuesday and Mass of Christian Burial will be at 10:30 a.m. on Wednesday. Burial will follow in Floral Lawns Memorial Gardens.

In lieu of flowers, memorial contributions are to the family for designation to tree planting and the Golden Retriever Rescue. Online condolences may be shared at odeanchapel.com.