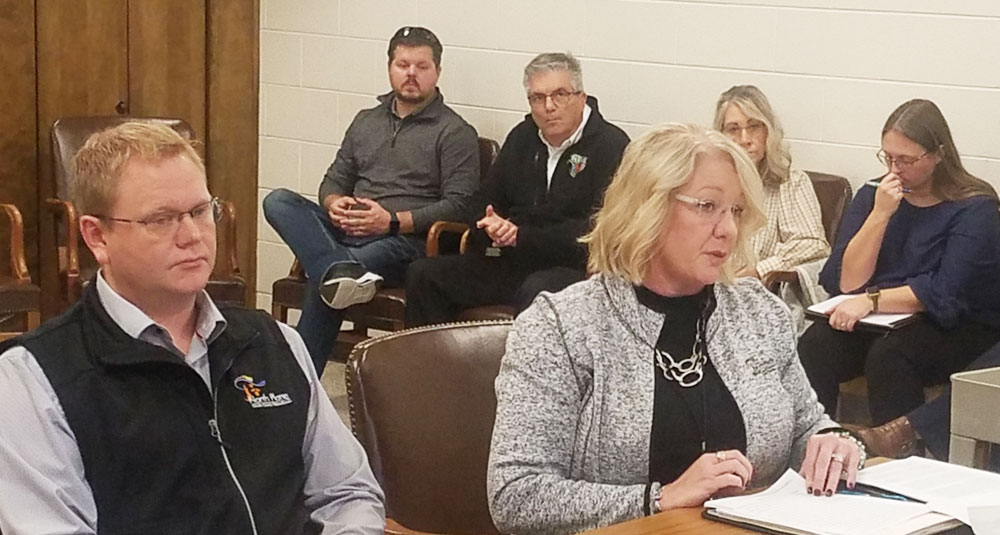 Lisa Burke of the Visitor’s Bureau told the Lincoln County commissioners on Nov. 15 that the advisory committee looked favorably at the application.

Sports events are a growing dynamic that can propel a community to economic prosperity even during a recession, Burke said.

In 2019, sports tourism generated $103.3 billion in spending across the U.S., according to the State of Sports Tourism in America industry report. The survey found that in 2019, nearly 180 million people traveled to a U.S. sporting event either as a spectator or a participant, she said.

Burke said other events in North Platte have shown that North Platte can be a good destination for Denver and Omaha sports teams that don’t have the budget to travel to each other’s cities.

Events such as the national horseshoe tournament and regional boxing matches have shown that people will come to North Platte for such competitions.

Burke said the increased capacity at the D&N will also be available for local events during the week and accommodate more local teams, creating a positive impact for the economy as well as the community.

She said the D&N is a valuable partner with the Visitors Bureau in bringing major sporting events that have a significant impact on the area economy, and the proposed $7.5 million expansion could potentially be big enough to make it possible for North Platte to attract several large multi-state and national events.

The $600,000 grant will be spread over three years, and certain conditions must be achieved before the installments are paid.

Haneborg told the Bulletin later he has applied for CARES Act funds that could pay half the cost of the expansion, if the application is approved. He said he hired an engineer to draw up plans for the expansion in February 2020, but the plans were delayed by the pandemic.

CARES Act funds are designed to help such projects.

Under the reconstruction plan, most of the existing tennis courts would be converted to pickleball courts. The existing subsoil problems will be corrected and new surfaces poured.

The rebuilt courts would provide the space to host tournaments at a central location, while benefiting North Platte residents and the North Platte public school district, Burke said.

The city administration will recommend the council consider a 50-50 cost share, with the city paying 50% and interested residents / athletic leagues paying 50%, according to the council agenda.

No to the playhouse

Sue McKain of the North Platte Community Playhouse presented a grant application in the amount of $155,469 for the replacement of the upper, lower, and canopy roof of the old Fox Theater.

“While recognizing the accomplishments of the volunteers involved with the project and the importance of this facility to the tourism mix in North Platte, the advisory committee recommends no funding during this grant cycle,” she said.

“The Visitors Bureau have been great partners and we are currently working with them on some other projects,” Playhouse board president Stu Shepherd told the Bulletin. The other projects include two Canteen Christmas shows on Dec. 18, and a cast performance about the Canteen for bus tours in the warmer months.

Shepherd said the playhouse will continue to seek grant support from other organizations to complete the work on the roof.

Jim Griffin and Beth Schanou of the Lincoln County Historical Museum requested $8,544.75 for electrical, security, wood paneling for the ceiling, and other construction supplies for the Daughters of the American Revolution cabin at the museum – one of the first cabins in Lincoln County.

Burke said the Lincoln County Historical Museum is truly a treasure, proven by the fact that number of visitors there has grown from 7,500 annually to more than 24,000 under the curatorship of Jim Griffin.

“Maintaining the condition and historical integrity of the artifacts, including the historical buildings, is an important part of attracting these visitors,” she said.

The advisory committee recommended a $5,365 grant for the restoration.

Top photo by George Lauby: Brad Hisel and Lisa Burke of the Visitor’s Bureau present their recommendations to the county commissioners with other members of the advisory committee behind them. Tap on image to enlarge.