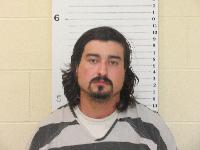 Timothy Johnson was sentenced Monday to consecutive terms in the Lincoln County jail for possession of controlled substances and possession of a stolen handgun.

On Tuesday, Sept. 15 at 4:16 p.m., police conducted a traffic stop near the intersection of Fourth and Jeffers in North Platte and contacted Johnson, 29, as well as the driver, Jacob Orr, 27. Orr had failed to use his turn signal before the car was pulled over.

A Nebraska State Patrol K9 drug detection dog was summoned and indicated the presence of narcotics in the vehicle. That led to a search, where police found a concealed .9 mm handgun and several prescription pills.

The handgun turned out to be stolen.

A check of Johnson’s record showed he is a convicted felon, so he was charged with possession of a firearm by prohibited person in addition to carrying a concealed weapon, and two counts of possession of a controlled substance.

In exchange for Johnson’s no contest plea, prosecutors dropped one of the weapon charges.

Johnson will serve 364 days for possession of a stolen weapon, with 190 days credit. After that jail term, he will serve consecutive sentences of 364 days for two drug crimes, with 76 days of credit.

After Johnson completes the jail sentences, he will be on post-release supervision for another year, Piccolo said.

In other district court sentencings, Erick Coffey was sentenced to 2-3 years in the state penitentiary for assault with his motor vehicle.

Coffey injured a man in a hit-and-run near the Newberry access on the late afternoon of May 2, 2020 police said.

The witness said that she and the victim were walking down Newberry when Coffey’s vehicle came at them at a high rate of speed.

The witness said they tried to move out of the way but Coffey swerved, crossing oncoming traffic lanes, and hit the man with his truck. Witnesses said Coffey stayed on the scene briefly, but then fled.

Coffey picked up another charge on April 27, when he paid for items in North Platte with two counterfeit $20 bills. The bills had the words “Motion Picture Use Only” printed on them.

In other court proceedings, Eugene Richter will undergo a competency evaluation at the suggestion of the Lincoln County Attorney.

Richter was arrested in mid-September after he was found with a loaded, concealed .9 mm pistol and several magazines in St. Patrick’s Catholic church in North Platte.

Richter did not have an active permit to carry a concealed weapon, and also had an active protection order against him, prohibiting him from having a firearm, police said.

Murder suspect Keith Allen’s defense attorneys asked for more time to research the case and question witnesses. Allen was ordered to return to court on July 12.

He has been behind bars since May 22, 2020, when he was arrested in the shooting of Brett Allen Torres.

Police converged that day in the 100 block of N. Chestnut in North Platte, just a few blocks from downtown, after Allen and others called 911 around 2:30 p.m. to report the shooting.

Allen was arrested at the scene and has been in jail since that time.

The competency to stand trial and participate in her own defense will also be evaluated for Maria Perez, at the request of Defense Attorney Martin Troshynski.

On April 7, police went to the 2400 block of W. Ninth to check out a woman reportedly causing a disturbance. They found Perez, 21 and multiple victims.

Police were told that Perez got upset, hit and kicked two juvenile males, and then reportedly went outside, threw a rock through a window, grabbed a metal pipe and made threatening statements and movements towards another person with the pipe in hand.

“She doesn’t seem to understand the gravity of the situation,” Troshynski told the court.