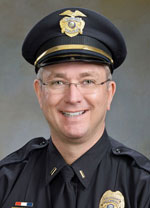 “We’re going to take care of this because technically we need a police chief,” Mayor Brandon Kelliher said to chuckles of approval. The vote was unanimous, 7-0. Jim Carman was absent.

Kelliher told the Bulletin that there were initially three applicants for the position, including Reeves, but two applicants failed to supply some information that was needed for a background check.

Before the vote, the council held a closed session with Reeves for 12 minutes. They did not say what it was about.

After the vote, Kelliher swore Reeves into the office, requiring that he support and defend the U.S. Constitution and the Nebraska Constitution against all enemies — domestic and foreign.

Reeves has been with the police department for 33 years. He joined in September 1988 and was promoted through the ranks. He was an investigator in 1992, sergeant in 1998, lieutenant in 2011 and deputy chief in 2019.

The position came open due to the early retirement of Dan Hudson, who served North Platte for three years after a career with the LA police department. Hudson is retiring in Florida.

The chamber was nearly filled with officers and staff from the police department. Everyone there gave Reeves a standing ovation after he was sworn in.

Reeves thanked the council and the audience for their attendance and support. He also thanked Hudson for his support and three years of leadership.

A lot changed at the department under Hudson, he said.

The department is currently “short a lot of people” so, the focus will be on stability, recruiting and retention, Reeves said.

In other business at the meeting, the council:

• Heard about minor changes to the city’s wards and voting precincts to keep the number of people in each area relatively equal, after the 2020 census. Very little changed, Zoning Administrator Judy Clark said. Ty Lucas asked if this would change where people vote. Clark said it is possible that some will change, and voters will be notified, and polling places are posted on the Lincoln County website. No action was taken. The council must ratify the changes by the end of the year.

• Consider a rezoning request at F St. and Willow to allow an existing duplex to expand to a four-plex residence.

• Discussed the time allotted for public comments at public hearings, addressing a concern that members of the public do not get equal time with the advocates of the action. In some cases, the main advocate have as much as six times more time to address the council as an individual opponent is allowed. The council weighed options and generally agreed to leave it up to the discretion of the mayor – the presiding officer at council meetings. Kelliher said he has always been willing to allow opponents to stretch their three-minute time limit if more time is needed to make their point. No action was taken.

• Approved a special liquor permit for Brittany’s on Nov. 27 and Dec. 11 for tasting events.

• Approved a special liquor permit for a wedding reception on Nov. 20 at the D&N Event Center.