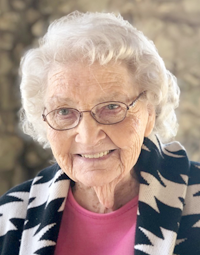 Delores Yvonne (McKillip) Richards, 92, passed away Thursday, Jan. 6, 2022 at her residence near Hayes Center surrounded by her children.

Delores, the oldest daughter of Irwin “Fay” and Letha “Mae” (Gangwish) McKillip was born Aug. 28, 1929 in Hastings. Delores and her brother rode a horse to District 29 School (McKillip School) which she attended through the 8th grade. Delores excelled in 4-H, winning a trip to Chicago and was awarded a heifer for outstanding record keeping.

Delores and Harold’s lifelong romance began with him walking her home from a Halloween party their freshman year. Delores took Normal Training while in high school and graduated as Valedictorian from Hayes County High School in 1947.

Immediately after high school she taught country school with time spent between Districts 15, 27 and 29 for two years before marrying her high school sweetheart, Harold Lee Richards on July 27, 1949, in Hayes Center. To this union four children were born: Sherry, Terry, Barry and Kerry.

Delores was a member of Bethel Baptist Church, the Women’s Missionary Guild, and served on the Hayes County School Board. Lifelong friends were made during Harold’s time in the army as well as during the years they spent in the American Agriculture Movement. They participated along with Terry and Barry in the American Agriculture Tractorcade to Washington DC in 1979.

She loved all aspects of farm and ranch life as she worked side-by side with Harold feeding and raising cattle, harvesting and hauling wheat and anything and everything else needed to have a successful operation.

She was a great cook and enjoyed passing on her cooking skills. Every moment, whether in the kitchen or riding in the pickup, was an opportunity for teaching her children, grandchildren and most recently her great-grandchildren.

Visitation will be Sunday, Jan. 16 at Herrmann-Jones Funeral Chapel in McCook from 2–5 p.m. The family will be present to receive friends.

Funeral services will be held at Bethel Baptist Church in Hayes Center on Monday, Jan. 17 at 10:30 a.m. with Pastor Leonard La Hair officiating. Burial will follow in the Hayes Center Cemetery. Herrmann-Jones Funeral Chapel is entrusted with arrangements.

Memorials may be given in her name to McCook Home Health & Hospice or to the Bethel Baptist Church of Hayes Center. Online condolences may be left at herrmannfh.com.