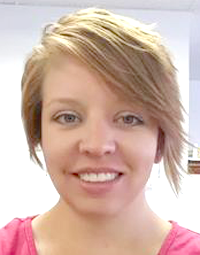 DeAnna Michelle Seibert Runge, 38, passed away at her home on Sept. 19, 2022 after a courageous battle with breast cancer.

DeAnna was born April 17, 1984 in Glenwood Springs, Colo. to Randy and Wilma (Maxwell) Seibert. Originally from Eagle, Colo., DeAnna moved to Ogallala with her parents in April of 1998 at the age of 14. She went on to graduate from Ogallala Senior High School in 2002.

She met her husband, Eric, in the summer of 2002 at the Skating Rink in Grant. It was love at first sight, and they were married on June 14, 2003. During their first couple years of marriage, she attended Mid-Plains Community College and graduated in 2005 with an Associate’s Degree in Applied Science of Business Management.

Her favorite days were spent with her children and family. It didn’t matter if it was camping, watching her kids play sports, or just having a relaxing day at home; this is when she was the happiest. She also had a great love of music and her four-legged family members, Maggie, Axel, and Reese.

DeAnna held several different jobs during her life. From working at Ladybug Crossing Daycare, Office Manager at R&W Roofing and Seamless Gutters/R&W Exteriors, and her most recent job as a Para Educator at Prairie View Elementary School. She loved her job at the school and always took great pride in her work.

DeAnna is survived by her husband, Eric Runge, and their children, Preston and Makayla Runge, all of Paxton; parents, Randy and Wilma Seibert of Ogallala; brothers, Randall (Penny) Seibert of Ogallala and Rick (Nicole) Seibert of Phoenix, Ariz.; father and mother-in-law, Robin and Carol Runge of North Platte; brother-in-law, Alex (Breena) Runge of North Platte; along with numerous nephews, nieces, and close friends.

Memorial services will be on Saturday, Sept. 24 at 2 p.m. at the New Hope Church in Ogallala with Pastor Mark Baldwin officiating. Inurnment will be in the Paxton Cemetery. It was DeAnna’s request to come casual, in pink and purple.

Memorial book signing with family receiving friends will be on Thursday from 6-8 p.m. at the Prairie Hills Funeral Home in Ogallala, which is in charge of arrangements.

In lieu of flowers, a memorial has been established in DeAnna’s memory to support a college fund for her children. Condolences may be shared at prairiehillsfuneralhome.com, where the services will be streamed live.