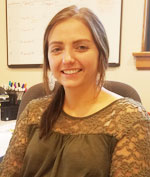 The county has 22 separate bank accounts, as well as five Certificates of Deposit, Gurciullo told the commissioners. She said there is no practical reason for the county to have that many bank accounts.

Not only that, but the money in some accounts earns virtually no interest, Gurciullo said.

The board thanked her for her research and diligence and approved the closure of four bank accounts and the opening of a new account at Western Nebraska Bank. The county will receive 0.7% interest on a money market account at WNB.

Gurciullo said that is an excellent rate — one of the highest rates in the nation currently.

The county’s bank accounts will be closed at Union Bank and Trust in Lincoln as well as an affiliated account at the Nebraska Public Agency Investment Trust.

Gurciullo said there is $1.3 million in the Union Bank account, but only $27.25 with the NPAIT.

More than 20 years ago, several public officials were looking for a statewide cash management system that would provide an investment alternative for short-term funds, according to the NPAIT website. Lincoln County Clerk Becky Rossell said that the county has worked with NPAIT off-and-on since then. The money was placed with Union Bank.

Gurciullo made it clear that she has nothing at all against Hershey State Bank. She noted that the money earns 0.4% interest there, which is a relatively respectable return these days. But, the county can earn more (0.7%) at Western Nebraska Bank.

“I need to consolidate some of these accounts,” she said. “It’s a lot.”

The commissioners approved all her actions unanimously, except the closure of the Hershey State Bank account, which was a 3-1 vote in favor. Jerry Woodruff voted no. The fifth person on the board, Commissioner Bill Henry, resigned two weeks earlier due to health concerns.

Also, the board assured Gurciullo that she has authority to move $2.1 million within a designated credit account at First National Bank into an account that pays more interest.  Money can only be deposited into that credit account; it can’t be withdrawn, she said.

After the meeting, Gurciullo told the Bulletin that she learned more about the accounts as she went to the banks to fill out their signature card, a step to allow her to access to the accounts. She has been on the job for two weeks. When she learned about the interest rates, she resolved to update the bank accounts.

The commissioners generally agreed that her actions might spur more competition among banks to hold the county’s short-term money, and lead to higher interest earnings.

In other business, the board approved two interlocal agreements that were tabled a week ago for more research. Agreements with the city of North Platte to share Internet specialists, and the agreement to share emergency management services, were extended.

During the last week, Commissioner Chris Bruns said he reviewed the agreement in detail with City Administrator Matt Kibbon and they agreed it was fair, Bruns told his colleagues.

However, the annual interlocal agreement with the city on road work on the outskirts of town is still on the table. One road is at issue, which is primarily a county road but is owned in part by the city. County Attorney Tyler Volkmer said he will look into it further.

• Approved a special liquor license for the Callaway Market for a reception at the Lincoln County Fairgrounds on Oct. 30.

• Approved a special liquor license by Good Life on the Bricks for a reception at Harbor Lights on Oct. 30.

• Approved a right-of-way agreement with Dawson Public Power for a power line on Stark Road, about 5.5 miles northwest of Hershey.

• Approved the annual property tax levies for all political subdivisions in Lincoln County. Lincoln County Clerk Becky Rossell brought a revised list of levies to the meeting, and said corrections might still have to be made.

Rossell said in some other counties, valuations were changed but county clerks were not directly notified, so she would double check the figures that she received. She also said one school district used the wrong valuation in figuring its levy, and some budget documents were in such small print that they were hard to read. She said she would continue to work at it. Lincoln County has until Nov. 5 to make corrections.

• Appointed former Commissioner Bill Henry to the Sandhills Resource, Conservation and Development board.