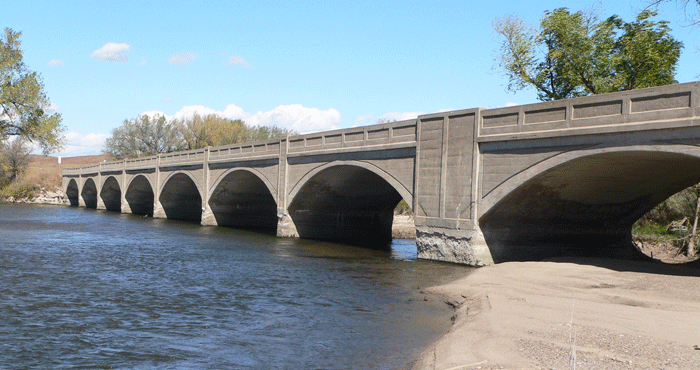 Construction on a new, long-awaited Sutherland Bridge is scheduled to begin this year, leading the list of projects on the one-year plans of the Lincoln County Roads Department.

Also, the resurfacing of Prairie Trace Road, a 17-mile-long blacktop road that runs north from the bridge to the McPherson County line, is high on the list of improvements, Road Superintendent Carla O’Dell told the county commissioners Monday.

O’Dell said the construction engineers for the bridge, Miller and Associates of Kearney, are waiting on information from the Army Corps of Engineers but planning to make the new bridge happen this year.

The one-lane bridge crosses the North Platte River. It is 106-years-old this year. Replacing it has been tentatively planned for more than 30 years.

Prairie Trace Road heads north, winding through the sandhills. It is badly in need of repairs. O’Dell said later that construction dates are not set yet and it remains to be seen which project will be completed first, the bridge or Prairie Trace Rd.

The new bridge relies on state and federal cost-share funds. The project moved to the top of the state funding list seven years ago, but the Missouri River flooded, and money had to be reallocated to a bridge that washed out in eastern Nebraska.

Since then, it’s been a slow climb back for the Sutherland project to reach the top of the list.

Sutherland’s one-lane bridge serves about 200,000 acres in western Lincoln County and McPherson County. Farmers with wide equipment must drive 20 miles out of their way to get from one side of the river to the other because the bridge is so narrow.

Some mornings, fog above the river is so heavy that a motorist on one end of the bridge can’t see the other end, so two vehicles can start down the one-lane bridge at the same time. Conflicts are inevitable and wrecks are likely, residents say.

The bridge opened in 1915, after “the Nebraska Legislature decided Henry Ford’s invention was here to stay in 1910,” Sutherland Village Board Trustee Ken Main told the county commissioners in 2018. Area residents came up half the money that was needed and the state paid the other half.

The bridge is said to be the best example of the cost-share program that built 77 bridges in Nebraska between 1912-36. Of all those, the Sutherland Bridge is the only intact example of the concrete arch construction that was used in 1910-20, according to the Nebraska Historical Society.

In all, O’Dell has 13 other road projects on the one-year plan. They are:

• Eshleman Rd. – 2” maintenance overlay for 0.74 miles from Hall School Road to the end of the pavement.

• Wells Rd. – Removing a wooden bridge and replacing with a culvert.

• Sandhills Rd. – grading, drainage and stabilization of 9 miles of road from Barrett Subdivision north to the county line.