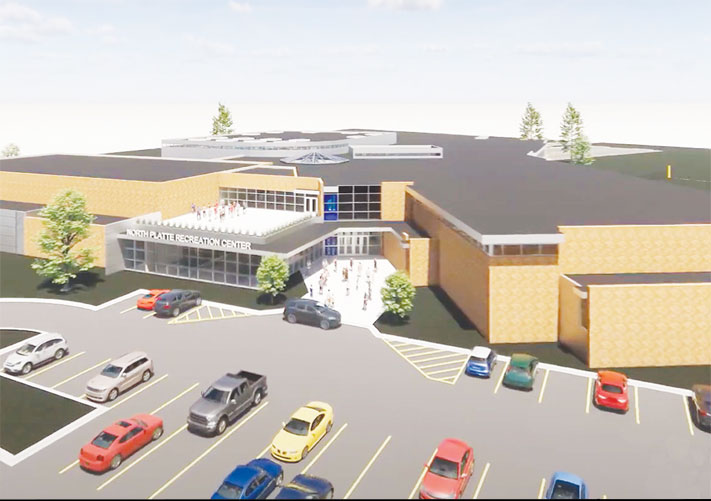 On Tuesday, the city council will consider approving a special election to vote on a $52 million improvement to North Platte’s pools and recreation center.

If the council approves, on Nov. 8 voters will cast their ballots on a half-cent increase in the city sales tax for the next 10 years.

The existing Rec Center has been regularly maintained but has not had significant improvements in 46 years. The dome roof over the pool is deteriorating and lack of space is an issue, according to an advocacy alliance of residents and community leaders called the North Platte Area Wellness and Recreation Alliance.

The project would renovate and expand the existing Rec Center into a significantly larger building. A second story would be added, making room for another gym for basketball and volleyball as well as pickleball and tennis.

The additional space would also include an indoor walk/run track in a figure 8 configuration, as well as expanded cardio and weight rooms.

The building would contain two swimming pools – a competition size pool plus a significantly smaller pool to serve swimmers during competitive meets, as well as younger children and people who walk in the pool for exercise.

North Platte High’s swimming team currently practices at the rec center, but the pool is not large enough for sanctioned swim meets, so the team has to travel to the other schools to compete.

Also, the outdoor Cody Pool at Cody Park would be renovated and a water park added, according to the proposal.

And, the North Platte Skate Park would also be moved and upgraded. It would be displaced by the expansion of the Rec Center.

The Scottsbluff YMCA has expressed an interest in managing the rec center.

That tax increase would generate about $3.2 million a year, based on 2021 figures. City sales tax income is steadily climbing, setting monthly records for more than a year.

Advocates say the timing feels right with the progress underway in North Platte — downtown development, the mall expansion, housing initiatives, the community-build playground at Centennial Park, a prospective beef packing plant and the early stages of an industrial rail park near Hershey.

Advocates point out that the sales tax increase would allow North Platte to capture more dollars from visitors — those passing through and those commuting to North Platte for work, who use city services but don’t pay city taxes because they live outside the city limits.

Here is a video of the envisioned expansion of the Rec Center.