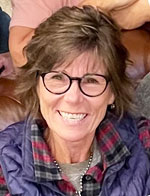 Pickleball is the fastest growing family sport in the United States and North Platte is on the leading edge of the trend, organizer Barb Baldridge told the city council Tuesday.

The council took a look at the first draft of a plan to rebuild the tennis courts at Cody Park, converting four tennis courts into nine pickleball courts.

North Platte pickleball activities are being studied by other communities, Baldridge said.

Baldridge stressed that the plan is a first draft. She said the proposed nine-court pickleball court would have the capacity to host big tournaments.

As a national USA pickleball ambassador, Baldridge recently traveled through the western U.S., stopping at pickleball courts in towns that she found by using a smart-phone app for pickleball players. She came across the potential court layout in Rupert, Idaho.

She is one of the discussion leaders on a Facebook for pickleball organizers, giving advice and suggestions to other communities.

She said a three-day tournament at Memorial Park during Nebraskaland Days, on a six-court layout, attracted 66 teams.

The North Platte pickleball community now consists of 120 family members, but started with only 12 members a year and a half ago, she said.

Baldridge said winter games will be played at the Salvation Army, the city Recreation Center and the D&N Event Center.

She said the pickleball community teams up with Sunrise Rotary and intends to offer games for all levels, on both the competitive and recreational level, for men, women, mixed, kids and multi-generations, to name a few divisions.

Kevin Wood, the vice president of the North Platte pickleball community and a wrestling coach and math teacher at St. Pat’s, urged the council to do all it can to help the sport grow in the city.

“It’s so much fun,” Wood said, drawing chuckles from the council. “It’s fun to just say the word, pickleball.”

The prospective Cody Park rebuild would cost around $300,000, with the city contributing 50% of that amount, and the pickleball community contributing 50%, according to the council agenda. The number of tennis courts would be reduced from eight to two in the project, with room to build two more on the existing space.

The discussion was for informational purposes, so no action was taken.

“We are used to hard work and we have a committee that is used to working hard for the community,” she said. “We intend to raise more than what is expected by our mayor and council.”

In other business, Mayor Brandon Kelliher said he would take a new approach toward comments at public hearings, to address some perceived inequities that he discussed at the previous meeting.

Kelliher said he will allow comments until the speaker reaches the point, unless he or she starts to get repetitive or strays off the subject. If that happens, he will warn them and give them one minute to wrap up.

Kelliher said he would keep track of how much time each speaker uses, so he can refine the procedure with pertinent data.

No starting date was provided in the council documents.

• Heard about a revised employee handbook, the first revision since 1996. No action was taken. City Administrator Matt Kibbon called it a “first stab at bringing it up to date” and encouraged the council to look through it, prior to a vote in December.

Councilwoman Donna Tryon noted that the handbook refers to a human resource office and asked if there would be such an office in the future. Kibbon said the office is empty now, but it is in the budget, and the position would likely be filled in the future.

• Recognized the city wastewater crew for the 15th Scott Wilber award in 15 years from the Nebraska Water Environment Association for general appearance and upkeep of the wastewater plant, and knowledge about its operation. Also, the crew also earned their 8th safety award, Kelliher said.

• On third reading, approved the rezoning of residential land at the corner of F and Willow for a four-plex residential building.

• Approved small adjustments to city wards to align with the population as recorded in the 2020 census. Each city ward will have about 5,848 residents.

• Mayor Kelliher proclaimed the week of Nov. 14-21 as Hunger and Homelessness Awareness Week in North Platte, in conjunction a national effort to increase awareness. He presented the proclamation to Judy Pederson, a former city councilwoman.

• The re-appointment of Tia McGuire to the North Platte Tree Board,

• The appointment of George Haws to the North Platte Tree Board.

• An application to the Nebraska highway safety fund for money to pay overtime for police officers during a extra “drive sober or get pulled over” enforcement period.