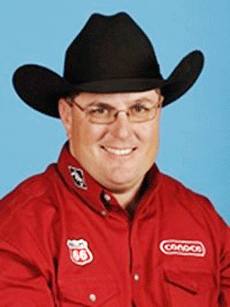 Mid-Plains Community College Head Rodeo Coach Garrett Nokes died unexpectedly Sunday at his home as he was recovering from a head injury.

Nokes was 45 years old. He had been hospitalized for a head injury he suffered at home on the evening of Jan. 28. He was reportedly kicked by a horse.

Nokes, a world-class rodeo competitor and an award-winning coach, was released from the hospital earlier this weekend.

The college announced his passing with sadness.

“He led by example and held high expectations for his student-athletes to do the same,” Community College President Ryan Purdy Garrett said. “He will be missed, but the impact he had on people both inside and outside of the rodeo arena will live on through them forever.”

After Nokes was injured, he was taken to the McCook Community Hospital and then life flighted to Kearney where he underwent surgery to treat the injury.

He was moved to acute rehab on Feb. 4 and finally to home after some 15 days in the hospital.

As a competitor, Nokes won several major rodeo titles and in 2005, he was fourth in the world standings in steer wrestling.

Nokes was named the college rodeo coach of the year in the Great Plains Region in 2019-20, chosen over 11 other head rodeo coaches in Nebraska, Iowa, North Dakota, South Dakota, and Wisconsin. The region includes four-year universities.

Nokes grew up outside of McCook and continued to live there.

He had an outstanding college rodeo career at Oklahoma State University, and as he was finishing college, he was named the Professional Rodeo Cowboys Association Rookie of the Year in 1997, after winning the Prairie Circuit steer wrestling as well as the Prairie Circuit all-around championship.

“Please keep the Nokes family, Garrett’s team, and the college in your thoughts and prayers as they go through this difficult time,” Purdy said.