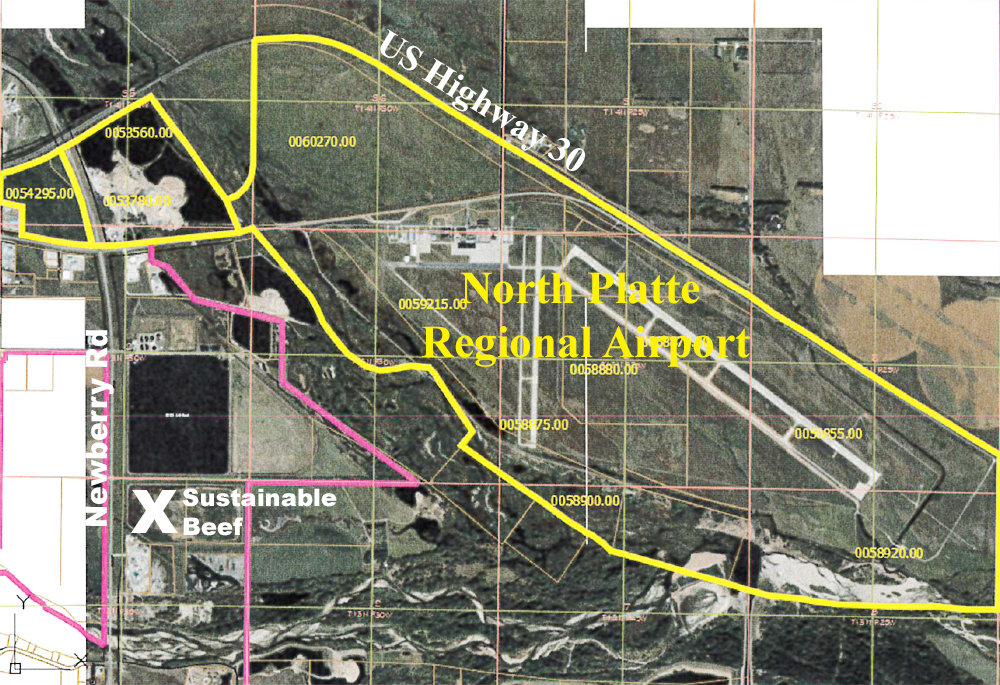 Areas proposed to be annexed.

The North Platte city council agreed Tuesday to annex the property of the North Platte Regional airport and two other parcels between the city limits and the airport.

The council also took a first step in addressing potential industrial odors, entering an agreement with Foulweather Consulting of Hansville, Washington for training and equipment to detect the type, source and severity of industrial-type odors.

The odor detecting equipment met with some criticism from council representatives who did not want to send a message that North Platte is unfriendly to industry. Mayor Brandon Kelliher broke a tie vote on tabling the agreement, and then convinced some of the skeptics that collecting scientific data is the best thing to do for the city.

The motion to make the agreement was adopted, 7-1, with Donna Tryon casting the only “no” vote.

The agreement calls for Foulweather to assist in purchasing odor-detection equipment and help train 4-5 city employees to operate the equipment. The staff will establish a odor baseline in addressing odor complaints, distinguishing the source, providing a scientific method and alleviating finger-pointing, according to documents prepared for the council.

Foulweather will charge $6,000 for the service, plus travel expenses.

Kelliher said the air quality will be sampled for a year or so, through all four seasons, with the wind blowing in different directions, to get a solid base of data on the current situation. He said then, if an industry is emitting too much odor, the city can contact them, give them accurate data, and ask them to check it out.

Kelliher noted that the city is on the verge of industrial growth, including the planned beef packing plant that will process about 1,500 head a day. Also, 4-5 businesses related to beef processing have expressed interest in locating in North Platte too. He also said other manufacturers may well come to the Rail Park, if it develops as envisioned.

He also noted that the city’s wastewater treatment plant is near the land where the beef plant plans to locate. So it will be important to distinguish the source of odors coming from that side of town to be able to address the problem.

Tryon moved to table the agreement. She said she’d grown up around feedyards and sugar beet plants, and odors are just part of the manufacturing process. She also noted that the beef packing plant has not yet gained approval from the state. She said collecting the data puts the cart before the horse. The council voted 4-4 on the motion, with Ty Lucas, Jim Nisley, Brad Garrick and Pete Volz voting no. Kelliher immediately broke the tie.

After the vote, Tryon said she’d also been in a community with a “clean-air” ordinance, and the regulations when way overboard.

Kelliher didn’t think the measurements would necessarily lead to an ordinance, but said it would bring science and facts to odor complaints.

In response to a question from Councilman Jim Carman about Foulweather Consulting’s experience, Kelliher said the company told him that it has worked in Colorado, providing equipment and training to measure odors of large marijuana farms, which can be considerable.

“We are entering a period of tremendous economic development,” he said. “We need to protect the quality of life for residents.”

The council agreed, 6-2, to forward the proposed annexation to the city planning commission for review.

Tryon and Woods voted no.

Tryon opposition was based on the fact that more land in the city would increase the percentage of land that can be TIFed (Tax Increment Financing.) Other councilmembers thought that would be a good thing for future development.

Next, the planning commission will hold a public hearing and discussion. If it approves annexation, it will refer the matter back to the council for approval. Three readings would be required before the council.

In a previous work session on Dec. 14, the council was informed about preliminary work the zoning administrator and engineer have done toward annexation, and the official steps that are required to annex the property. For the report on that work-session, click HERE.

Also, the council agreed on first reading to allow utility type vehicles to operate on city streets. Two more readings will be required.

Police Chief Steve Reeves said the ordinance is based on an ordinance in Norfolk where UTVs have been allowed for two years. Reeves said UTVs will only be allowed on city streets, not state or federal highways, so U.S. 83 and U.S. 30 “are out of play,” including Jeffers and Dewey from the South Platte River Bridges to the S curve downtown.

UTVs will be allowed to cross those highways.

These restrictions, as well as others, would apply:

Any person operating a utility-type vehicle:
a. Shall not operate the vehicle at a speed in excess of 30 mph and shall observe posted speed limits of less than
30 mph.
b. Shall have a valid Class 0 operator’s license or a farm permit.
c. Shall be 18 or older;
d. Shall obey all applicable state and local traffic laws, ordinances, and regulations;
e. Shall properly utilize seatbelts and all provided safety equipment in the utility type vehicle;
f. Shall have liability insurance coverage for the vehicle while operating on a street or highway;