During the last legislative session, I introduced a bill to stop treating social security payments as income and exempt them from Nebraska income tax.

A similar bill was introduced by Sen. Brett Lindstrom. I chose not to pursue my bill so Sen. Lindstrom could pass his LB 64. He has been introducing bills to un-tax social security since before I came to the Legislature. I felt the measure had a better chance of passing if the bill was carried by a senior senator. LB 64 passed 41-8 last May.

Unfortunately, when Jan. 1, 2025 arrives, another bill will be required to un-tax the remaining 50%.

LB 64 reads; “It is the intent of the Legislature to enact legislation within five  years  after  the  effective  date  of  this  act  to  increase  the percentage  of  social  security  benefits  that  are  excluded  under  this subsection.”

The bill was written with this intent language because the “fiscal note” (cost of the bill in lost income tax revenue) would have otherwise been over $50 million. As written, exempting 50% of Nebraskan’s social security income “costs” the legislature $28 million in lost revenue.

The bottom line is social security payments to Nebraska citizens will continue to be subject to income taxes unless another bill is passed. The money has already been taxed by the state and federal government. Nebraska is one of only a handful of states that do it.

Social Security is the only source of income for two-thirds of the people who are drawing it. I strongly believe that Nebraskans should keep the money that they worked for and earned and have already paid their taxes on.

I also realize that we need tax revenue to run our state government. Suddenly ending a revenue source of over $50 million isn’t prudent. Fully exempting Social Security payments may require a gradual approach stepped-in over a few years. Regardless of how this measure is implemented, un-taxing the remaining 50% will require a new bill.

I hope all Nebraskans had a very happy and blessed Thanksgiving with family and friends. I am honored and grateful to be your senator and represent such a beautiful part of our state. 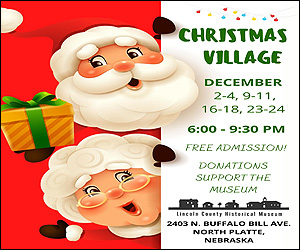