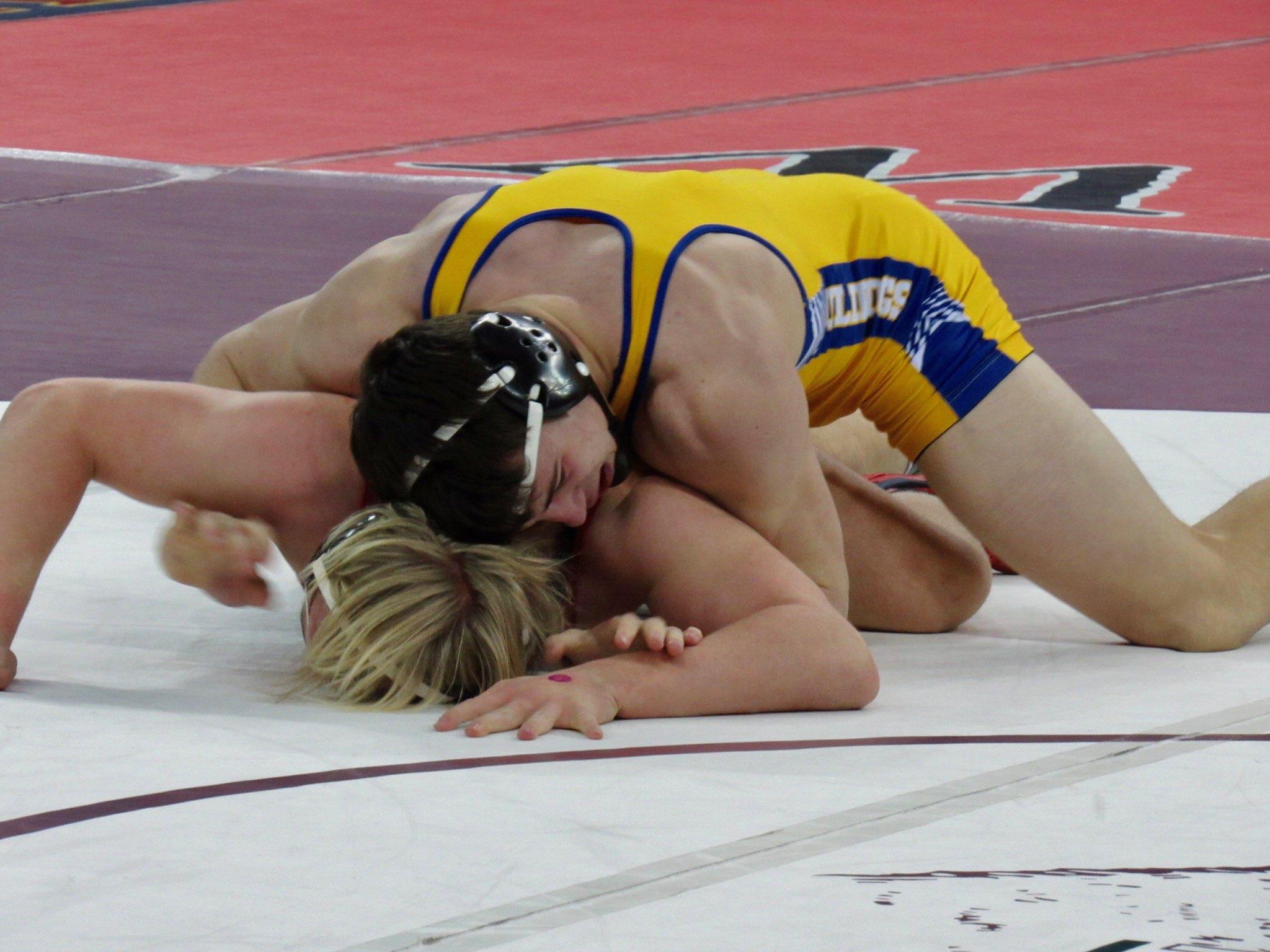 Gavyn Brauer and Vince Genatone of North Platte High School, as well as Jeremy Larson of Brady, claimed state wrestling championships on Thursday at the Nebraska state meet in Omaha.

Brauer (57-1) successfully defended his Class A championship in the 182-pound weight class when he pinned Lucas Nigh of Millard North in the third period.

The senior’s first match of the day was much closer. In the semifinals, he nipped Noah Blair of Millard West, 3-2.

In the next weight class at 195, Vince Genatone (52-3) earned the second state title for the Bulldogs, defeating Cole Haberman of Omaha Westside, 10-4.

In the semifinals, the junior dominated John Friendt of Lincoln Southeast, pinning him in just over a minute.

The wins by Brauer and Genatone in the finals helped the Bulldogs finish to a second-place finish in the team standings behind Millard South.

Jaylan Ruffin (54-5) finished third at 132. The NPHS senior was pinned in the semifinal by Garrett Grice of Bellevue East, but Ruffin won his next two matches to claim the bronze medal.

Brock Little (16-3) also finish in third place at 126. He was pinned in the semifinal by Connor Knopick of Millard South but came back to win his last two matches in the consolation bracket.

The senior claimed the Class D title at 132 when he beat Drake Belville of Doniphan-Trumbull, 11-2, in the finals.

That win polished off a perfect season for Larson, who amassed a 48-0 record this year.

In the semifinals, Larson made short work of Thomas Klemesrud of North Central, pinning him in just over a minute.

Luke Howitt of Maxwell also made it to the Class D final at 195 but was pinned by Brandon Knoles of Perkins County at the end of the second period.

In the semifinals, Howitt (33-3) pinned Gavin Anderson of Hyannis in the second period.

Howitt was one of two state medalists for the Wildcats. Kayden Stubbs (36-10) finished sixth at 220.

It was a tough day for the junior, as he lost all three of his matches. He lost, 8-3, in the semifinals to Brayton Branic of Sandhills-Thedford before falling in the last two in the consolation bracket.

All five of Sutherland’s wrestler medaled at the state tournament. Gavin White (42-3) and Samuel Foster (52-2) got third at 195 and 138, respectively.

White lost, 3-2, to Burwell’s Alex Gideon in the semifinals before winning his last two matches.

Foster had to wrestle through the consolation bracket after he was upset in the quarterfinals Wednesday by Reed Bennett of Elkhorn Valley.

Jon Peterka (46-8) got fourth place at 132. He lost in the semifinals to Belville, who Larson defeated in the finals. But Peterka split the next two matches in the consolation bracket.

With those five medals, Sutherland finished fourth in Class D.