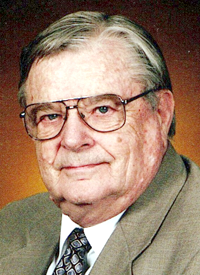 Blake Hinton, 92, of North Platte passed away at the Golden Living Center in Cozad on July 4, 2022.

Blake was born to Dale and Mary Hinton at South Bend, Ind., on July 11, 1929. He grew up in South Bend where he graduated from Washington Clay High School (in Clay Township) and worked for A&P Tea Company then for Greenwood Brothers Supermarket as a produce manager then store manager for 14 years.

On Sept. 10, 1949, Blake was united in marriage to Jeanette Louise Fair in South Bend. They were blessed with 63 years of marriage and five children.

Blake and Jeanette lived in South Bend until 1965 when they moved to Florida. They owned and operated Dog-N-Suds in Naples for five years then bought a restaurant in Ft. Myers and ran that for four years.

The Hinton family moved to Ft. Collins, Colo., in 1971 and he worked at a detective agency for a few years then returned to Florida. In 1982 they moved to North Platte and leased the Airport Inn, operating the restaurant until retiring in 1991, and were members of First Baptist Church.

Blake and Jeanette enjoyed traveling; they traveled through Europe, Texas, Alaska and all the lower 48 states. They especially enjoyed wintering in Texas. Blake was a member of the Masonic Tropical Lodge #56 in Ft. Meyers and the Shriners in Hastings. Blake was an amazing singer who sang with several opera groups in Florida and with the church choir.

Blake was preceded in death by his wife, Jeanette; son, Dave; father, Dale Hinton; and mother and stepfather, Mary and John Young.

Celebration of Life will be held at 11 a.m. on Tuesday, Aug. 9 at the First Baptist Church. Inurnment will follow in Floral Lawns Memorial Gardens. The memorial book may be signed online at odeanchapel.com or at Odean Colonial Chapel, which is in charge of arrangements.