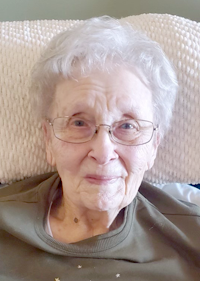 She was born on Dec. 20, 1931 in Grand Island to Edward and Silva (Kirkpatrick) Rodewald.

Bessie was raised on a cattle ranch in the Sandhills south of Seneca with her siblings: Evelyn, Dae, Don, Grace and Leland. She attended on horseback, a country elementary school near the ranch. During her teen years, she lived in Seneca and attended the High School, graduating with the class of 1949.

She married Kenneth Broeder on Aug. 24, 1950 at North Platte and to this union four children were born.

She was preceded in death by her husbands, Kenneth Broeder in 1985 and Rusty Walker in 2008; parents; sisters, Evelyn, Dae and Grace; brothers, Don and Leland; and grandson, Ryne Hoaglund.

Memorials are suggested to the Seneca Cemetery. The service will be live-streamed via Carpenter Chapel’s Facebook page. Online condolences and sharing of memories may be directed to carpentermemorial.com.