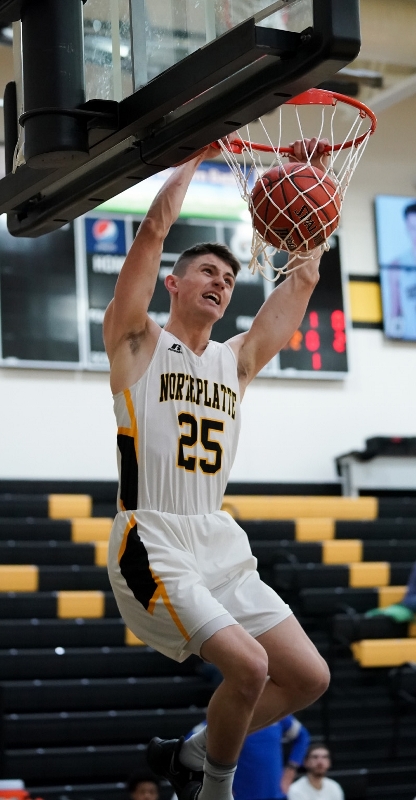 German Plotnikov dunks in the first half against Lamar.

German Plotnikov led all scorers with 23 points, but North Platte was unable to match the hot shooting of the Runnin’ Lopes of Lamar falling 83-65 on Friday.

In a tightly contested battle, neither team led by more than five in the opening twelve minutes of the first half. North Platte trailed in the opening minutes, before Plotnikov found Nico Felici open on the perimeter to give the Knights their first lead of the game, 17-15, with 13:15 remaining in the opening half.

The Knights stretched their lead to five as a missed three-pointer by Plotnikov was rebounded by Timur Krupalija who finished at the rim. During the attempt, Krupalija was fouled on the play and completed the three-point play at the free throw line. Lamar regrouped and retook the lead at the 11:26 mark of the opening half, as the Runnin’ Lopes began to heat up from the perimeter.

The Lamar lead grew to thirteen over the next five minutes, before the Knights began to march back and trimmed the deficit back to nine on a layup by Caleb Horne. The Knights and Runnin’ Lopes traded baskets over the remaining minutes of the first half, but North Platte headed into the break down by 41-32.

North Platte matched Lamar bucket for bucket in the open minutes of the second half, before Lamar extended their lead to 55-38 with 15:21 to play. Over the next seven minutes, the Knights tightened up on defense and narrowed the deficit to seven on a mid-range jumper by Plotnikov.

Lamar called a timeout and out of the short break extended their lead back to twelve. North Platte was unable to recapture the momentum over the final 5:13, as Lamar closed out the eighteen-point win.

The Knights (3-7) return to the McDonald-Belton Gymnasium on Saturday, Jan. 15, for a rescheduled game against Hastings College JV. Tipoff is set for 1 p.m.