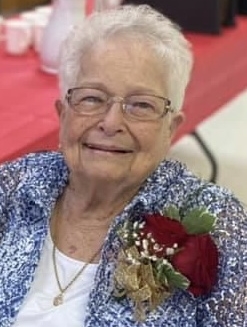 On June 21, 1931 a daughter was born to John and Mary Weber at her Grandmother Liptrap’s home in Gordon. She was named Barbara Ann.

She lived on the Weber Ranch until it was sold and then moved into Merriman and lived in a little house next to the school where she started Kindergarten. Her parents moved to Brady and worked for the Haythorn Ranch and she attended school in Brady through the eighth grade. She attended school in Maxwell her freshman and sophomore years, went to Curtis Ag School her Junior year and back to Brady where she graduated with her original class of 1949.

Barbara married Richard G. Gutherless in Texas, on July 3, 1950 while he was stationed with the United States Air Force. They returned to the Gutherless Hereford Ranch in Snell Canyon and began their ranch life while raising Joe, Susan, and Kristi. After moving to the valley to add more hay ground to the ranch Scot was born. Barbara was busy keeping the household going, she was involved in Boy Scouts as well as helping with the many 4-H projects of her children. She was a wonderful cook and a beautiful seamstress.

Living on Highway 30 she used to joke that their driveway must have a secret sign that said, “This is a good place to stop” because they helped many people with food, gas, repairs and even shelter.

Barbara kept the books for the ranch and Gutherless Hay Service as well as working the livestock sales at North Platte Livestock Auction for 33 years. She and her husband enjoyed the two winters they lived in Wickenburg, Ariz., after they sold the cattle. They had celebrated 63 years of marriage when Dick passed away of cancer. She sold the house in Wickenburg and bought a home in Brady where she lived until April of 2021 when she moved to Hilltop Estates in Gothenburg.

Barbara passed away on Sept. 17 at Hilltop Estates after a brief illness.  She loved her family but we are sure there was a joyous reunion when God took her home.

Barbara was preceded in death by her parents John and Mary Weber, her in-laws Frank and Ruth Gutherless, her husband Dick Gutherless, her son Joe Gutherless, her daughter Kristi Sukraw as well as her brother Jack Weber, sister-in-law Catherine Weber and brother-in-law Kenneth LeGrand.

Memorials may be given to the Brady School Foundation or the Brady Fire Department.  To sign the online guest book, go to www.blasestrauser.com.el & Monuments