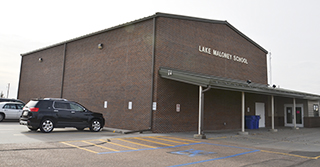 Administrators back away from school mergers

Closing or merging some North Platte public school buildings is off the table, Supt. Ron Hanson told the board of education Monday, because there has been too much upheaval in the community already.

Faced with a $2 million budget shortfall, the district needs to find ways to reduce expenses.

A few days ago, a half-dozen options were put forward, from closing Osgood and/or the Lake schools to closing Madison Middle School. Parents reacted negatively as well as at least one school board member and a retired teacher.

Seven people personally protested to the board at Mondays meeting. One of them brought a petition with 80 names on it. And, before they had the chance to speak, board member Ivan Mitchell, the senior board member on the board’s finance subcommittee, said the options were poorly communicated, and done without his knowledge that they were going out.

Supt. Hanson said he was persuaded to change his mind after a zoom conference with parents late last week. About 65 parents participated in the conference.

Hanson it became apparent to him that talk of consolidating schools is not good for the community now. He said the district has been through a lot of changes due to COVID-19 and Lake and Osgood families have gone through a reconfiguration of the two schools two years ago, as well as the repurposing of Osgood this year, when pre-school classes were added.

Thanks to suggestions from the public, the list of options had grown from 6 to 11 in a few days, but Hanson said he decided to focus on one option – making spending cuts as well as drawing about $1 million out of the district’s building fund, which is now growing because the high school bond was paid off in December.

Spending could be cut by eliminating buses between Adams and Madison middle schools and cutting about 10 positions. He said administrative costs would be reduced and greater efficiencies found throughout the system. In response to a question from new board member Angela Blaesi, Operations Director Stuart Simpson said special education teacher’s aides would not be reduced.

Mitchell was glad that mergers are off the table, but urged the administration to continue to look into closing Madison, sending those students either to Adams or to the elementary schools.

Board Vice President JoAnn Lundgreen objected to considering the closure of Madison. She said the all-sixth grade building is working well. She also disparaged the idea of eliminating buses between Madison and Adams.

Mitchell said it would be good to take a closer look at the numbers now regarding closing Madison, in case the board has to make more decisions about spending cuts in the future.

The board is expected to vote on the matter in one month, at its February meeting.

Parents who addressed the board said they would like to see a long-range, sustainable plan.

Board members urged anyone with concerns, questions and viable suggestions to contact them.

The 11 options are posted on the school district’s website.