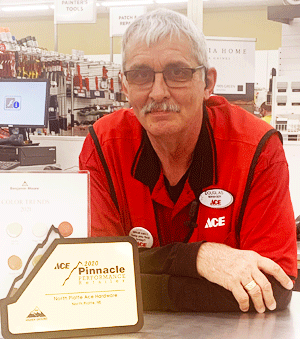 North Platte’s Ace Hardware store has earned a company-wide award for the third year in a row.

The store was recently awarded Pinnacle status – the top rating of Ace Hardware stores. It is their second straight Pinnacle award.

The honor is based on customer service and the variety of products the store offers, including such services as online ordering, curbside pickup and free delivery in North Platte.

“We couldn’t do it without our employees and our customers,” he said.

The North Platte store has come a long way in the past four years. In late 2017, it was purchased by Blake and Casey Burgess of Henderson, who also own Ace stores in York and David City, and went through an extensive remodeling and restocking it in 2017-18, Wallace said.

In 2018, the store earned a Platinum award from the company, a tribute to the progress they’d made.

In 2020, the pandemic brought more challenges, so the store stepped up their online service and deliveries.

“We’re at the top of our game now, and we will continue to strive to provide the best service to North Platte and the surrounding communities,” he said.