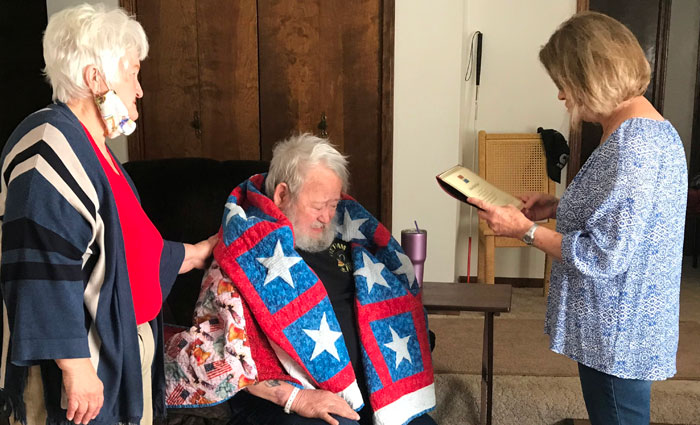 Three military veterans received quilts of valor Monday to show them gratitude, comfort and to commemorate their service to the United States.

The quilts were presented through the Heartland Nebraska chapter of the Quilts of Valor Foundation, which provide comfort and healing for veterans and active military members by wrapping them in the quilts.

He survived an enemy attack that killed many of his fellow soldiers. He is a Purple Heart recipient.

When Ryan returned home, he went to college and joined the North Platte Police in 1971, where he served until he retired in 2009.

Illo (Gene) Mitchem served in the Army in World War II from 1944-46. He was wounded in Okinawa and awarded the Purple Heart.

He was a fireman on the USS Duncan DDR-874. His tour of duty took him to Hawaii, Midway, Japan, Korea, Okinawa, Formosa, and Hong Kong.

Locally, 49 quilts have been awarded in the Lincoln County area since the effort began in 2019.

Top photo: Rick Ryan with his quilt, with Marilyn McGahan of the Heartland chapter of the Quilts of Valor Foundation at his side. Chapter Chairwoman Chris Reinert reads the presentation.