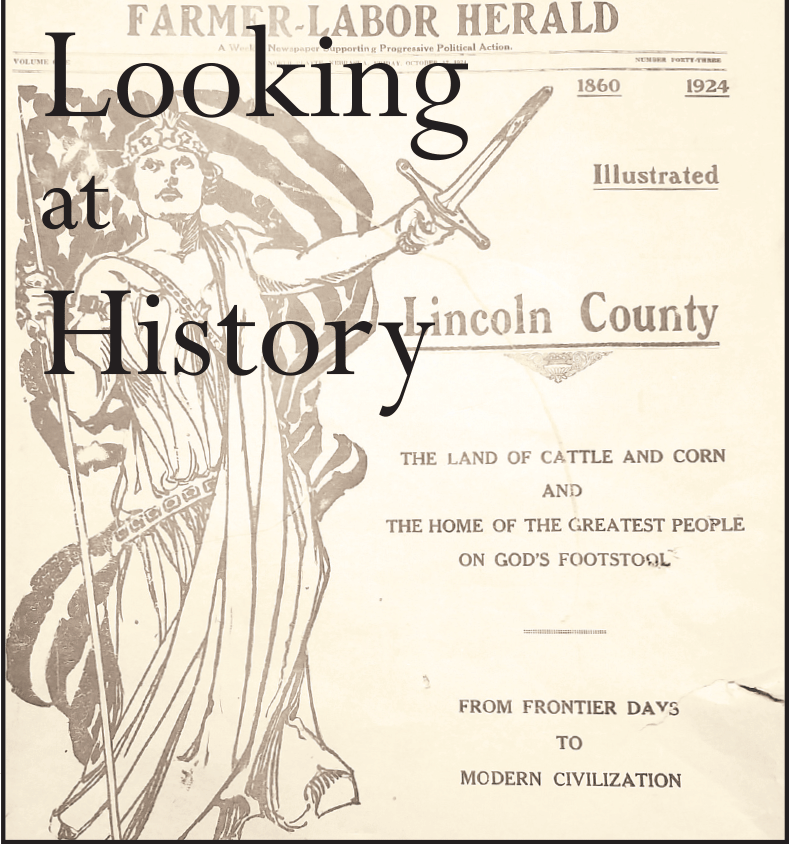 Although much of the United States was enjoying an economic boom after World War I, things were not good down on the farm.

Farmers had been encouraged to produce as much as they possibly could during the war, but the war ended, leaving vast surpluses. Prices crumbled, Lincoln County Historical Museum Director Jim Griffin said,

It was the roaring 20s, when investors thought there was no end to higher prices, so farmers had to pay inflated prices for equipment.

For farmers, the Great Depression really started around 1920, historians say. They struggled against bankruptcy.

In those times, the progressive political movement flourished, seeking to unite the interests of famers and workers. And one of Lincoln County’s most ambitious newspapers was born.

The Farmer Labor Herald, a large weekly paper, two feet tall and 18 inches wide, was published in the early years of the 1920s and went out of business in 1925.

The newspaper featured a picture of Lady Liberty on the front and a cover made of relatively heavy paper. Inside was page after page of advertisements and articles extolling the virtues of life in Lincoln County, if the Oct. 17,1924 issue is any example.

North Platte resident and Bulletin reader Bud Gale dropped off a copy of that issue at the office. The paper provides a good look at an interesting chapter in the county’s history.

The issue is 80 pages long. The paper claims to reach more farmers and laborers than any other paper, making it a good place to advertise. With its heavier than normal covers, each copy was built to be handled by several people.
The paper, a weekly, supported “progressive political action,” the front page said.

The lead article in the Oct. 17 issue has the headline – “North Platte, 4th largest town in Nebraska.”

The population was 14,216 “of as intelligent, moral, upright, industrious and progressive people as will be found in any community,” the paper says.

North Platte ha neat and comfortable homes, the paper said, along with good schools and attractive churches, substantial business houses and banks as well as busy factories. The area is a garden spot, the newspaper says, in the heart of the greatest agricultural and livestock region of the United States.

It was a “romantic location” for a town, built in the broad, beautiful valley between the Platte Rivers, which joins the Missouri River about 300 miles distant, or 400 miles distant by the rivers’ meanderings.

Not only that, but North Platte “is the most important shipping point between Omaha and Portland or Seattle,” the front page article says, and the article continues for several pages, listing the wonders of North Platte.

The front page of the Oct. 17 issue also pays tribute to the city band, including a picture in the center of the front page. The band is named the Union Pacific Band — indicating where the money for the uniforms came from.

“Music hath charms to sooth the savage, to soften a rock or split a cabbage,” the article says, as it describes boys and girls serenely enjoying a band concert in the city park.

“North Platte people are behind no city in the state in respect to natural talent and splendid musical equipment,” the article says.

Page two of the issue is a full-page ad for the Alaska Fur Co., a company that not only bought fur from area trappers, but also sold the apparel in a downtown store.

North Platte is a “real railroad city,” the Herald said, on the edge of the Mountain Time Zone, with passenger “stations, loading docks, stockyards, and everything necessary in modern railroad facilities.”

More than 1,000 men were on the railroad payroll at the time, the article says, paying their union dues, investing in homes and the well-being of the community.

North Platte’s seven school buildings employed 74 teachers at the time, who earned from $1,200 to $1,400 per year, depending on it they taught at elementary school or in senior high. That equated to about $1 an hour. The president of the school board was none other than M. Keith Neville, the former governor of Nebraska, and the man who later built both the Pawnee Hotel and Fox Theater downtown.

Advertisements featured such places as the airfield, Dixon Optical on Dewey St. (which is still there,) the Blue Goose Café, Frater Drug Co. and the Hotel Palace, which stood opposite the Union Pacific Depot along the tracks just north of downtown, plus floral shops, banks, service stations, car dealers, photographers and couple stores that offered undertaking services as well as merchandise for the living, such as hardware and furniture.

Another article takes the reader from the days of “Dug outs and shanties to present prosperity.”

Although the paper had a political bias, there are relatively few political ads. Some ads tout the merits of candidates for non-partisan offices.

Entire sections of the issue are devoted to the villages of Lincoln County, including the small settlements at Wellfleet and Bignell.

The names of all the county teachers are published.

There is an article on the great government land lottery of 1913 in North Platte, which 42,000 people reportedly attended.

Names were drawn out of a hat by two young girls of sterling character – Mable McFarland and Ruth Elder. An extensive article describes the process, as well as the background of Judge James Witten, who came from Washington to conduct the lottery.

Another lengthy article describes progress on the north side of North Platte.

There are general news reports from such places as the Cottonwood Valley, and histories of the voting precincts across the county.

The cost of the paper was $2 at the time.

There are no political opinions on the issues of the day in the paper, aside from the overall tone — the positives of living in the area, the attractive features, and the importance of farming and working.

(This article was published first in the Bulletin’s March 10 print edition.)