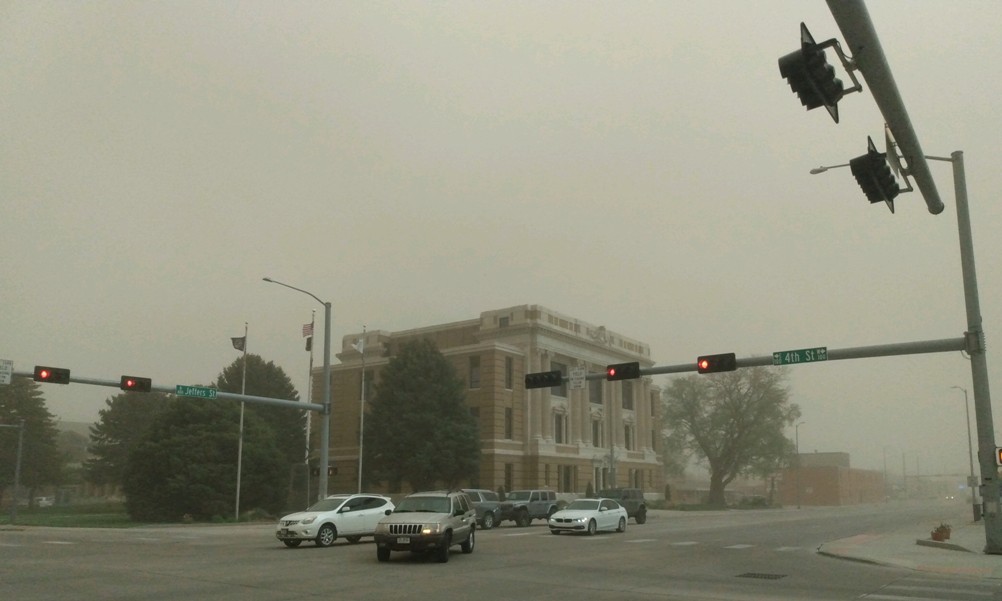 Dust swallows the background of the Lincoln County Courthouse.

A dust storm roared through North Platte Thursday afternoon, ushered by strong winds, limiting visibility to a couple of blocks and knocking down trees.

The storm originated west of Lake McConaughy in Garden County and blew southeast across parts of Keith, Perkins, Lincoln and Hayes counties, said Jaclyn Gomez of the weather service in North Platte. Dry conditions and spring farm tillage were contributing factors, along with the high wind. The storm lasted about an hour in the North Platte area. Gomez said it largely dissipated after blowing through Lincoln and Hayes counties. However, there were similar dust storms in other parts of Nebraska and South Dakota.

At the height of the storm, zero visibility is blamed for a multi-vehicle wreck two miles east of Sutherland on U.S. Highway 30 about 4:20 p.m., the weather service said. Eleven vehicles were involved, Nebraska State Patrol spokesman Cody Thomas said. Only minor injuries were reported.

The first responders and tow truck drivers, assisted by some of the drivers of the vehicles, endured the storm and untangled the wreckage. US 30 from Hershey to Sutherland was closed for about two hours.

Among the wind damage, a tall pine tree blew over at the home of David and Emily Cooper at Fourth and Tabor, at the east end of Memorial Park. The tree stretched across the street. No one was injured, but part of it fell across the bed of Cooper’s pickup, which was parked at the curb.

Emily said David heard a creaking and a loud crack. He watched from the kitchen window when the tree went down. It fell in the direction the storm and straight line wind traveled — east-southeast.

In Burwell, 80 mph winds ripped down a large section of the north side grandstand awning at the famed rodeo arena. Before the afternoon was over, officials met to assess the damage and decided to cancel a “PRCA Bulls and Broncs” rodeo planned on Memorial Day weekend.

After analyzing the damage in the Burwell area (Garfield and Wheeler counties), the weather service reported that straight line winds apparently gusted from 70-110 mph, which are “hurricane force.” Numerous high-tension power line poles were bent over at the base. Several outbuildings were destroyed. Several homes lost parts of their roofs. A mature stand of ponderosa pines were snapped in half. Along Nebraska Highway 91 east of Burwell to Ericson, numerous power poles were snapped in half.

In the rebuilding of the Burwell rodeo grounds, a GoFundMe account has been established. For those that wish to donate by cash or check and have 100% of the donation go directly to the rebuilding fund, details will be posted on Monday at Nebraska’s Big Rodeo. The 2021 Miss Burwell Rodeo Royalty, including Miss Rodeo Nebraska candidate Rebel Sjeklocha, are the spokeswomen for the fund drive.